Tasting notes overview: A rich expression full of brown sugar and maple notes on the nose with a coating mouthfeel of caramel, allspice, and long drawn out finish. Through the bold virgin oak notes dance the spicy undertones of the unmalted barley in the mashbill.

The Bourbon Cask & Stave Series is aged using a process inspired by winemakers. From the beginning of maturation, virgin charred oak staves are introduced into second-fill bourbon cooperage, allowing for a diversity of flavor traditionally unachievable from a single cask. The controlled oak additions lend to a more grain forward whiskey reminiscent of its Irish cousins.

Tasting notes overview: An elegant dram full of vanilla bean and delicate esters on the nose that meet a bright, grain forward palate. The oak notes of the charred and toasted staves peek through, marrying with the ex-Bourbon cask sweetness finishing with a slight white peppercorn spice on the tongue.

Both releases are aged a minimum of three years and will be bottled at 86 proof (43% ABV) in sophisticated gold foil labels and sold inside attractive paper tubes. Beginning August 20, 2021 the release will become exclusively available at the distillery location until September 20, 2021, after which the release will be available at both the distillery and key Colorado retail locations. See the locator map on Talnua’s website for details. Supply is limited to less than 150 bottles of each per month through the end of 2021. 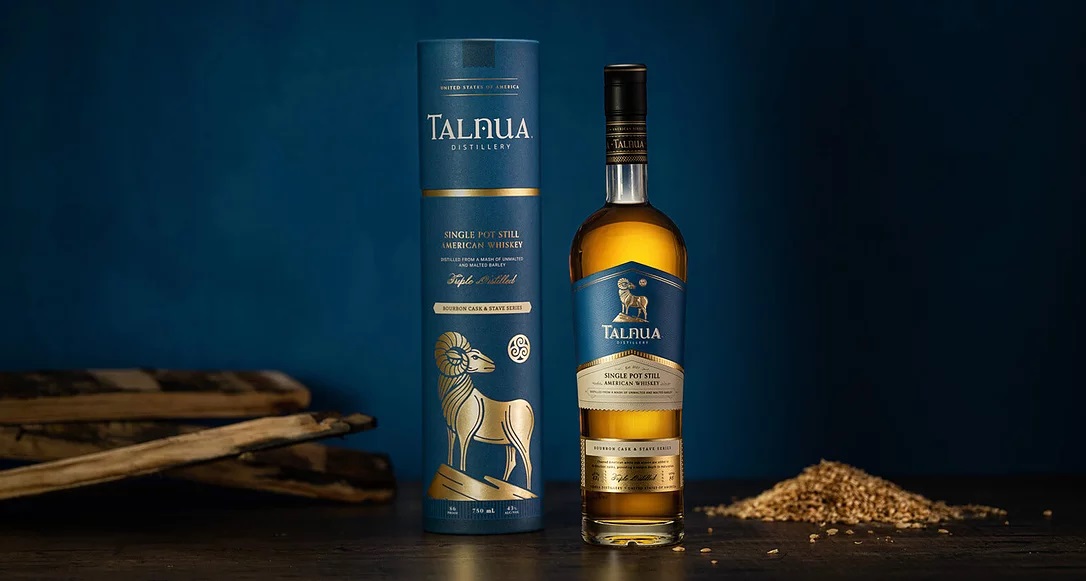 Talnua Distillery is an artisan small batch distillery that proudly hand crafts each of our spirits. Established in 2017, we embarked on a mission to define a new chapter of whiskey history with the introduction of our American Single Pot Still Whiskey.

True to gaelic-style distilling practices, and unique to the new world, our spirits are produced using a mashbill of un-malted and malted barley and triple distilled in copper pot stills. Located on the Front Range of the Colorado Rocky Mountains, the altitude, changing seasons, crystal clear mountain spring water, and local barley all lend a uniquely American terroir to our products.

We are honored to carry on the traditions of our Irish ancestry and are proud to be leading the way as America’s First Single Pot Still Distillery.

It all began with husband and wife team Patrick and Meagan Miller. In a Galway pub on their honeymoon, they sat watching the 2011 Ireland vs. USA Rugby World Cup Match. An eager bartender was thrilled to share with them the first single pot still whiskey to be released in decades. He regaled them with the history of this nearly extinct style of whiskey and with the passion that one day, single pot still would regain its rightful place on the world stage. The love affair was instant, and the couples’ passion was forever ingrained in the story of single pot still whiskey.

With family history rooted in Irish ancestry, the couple returned to Ireland every year and knew that single pot still whiskey would forever be a part of their story.  Knowing that single pot still whiskey was not yet available in the US they set out to create the first Single Pot Still distillery outside of Ireland. They wanted to bring this style of whiskey to America and imbue it with the nation's terroir while honoring Gaelic distilling traditions, the immigrant soul, and the pioneering spirit of the American people.

Our whiskeys and gins are produced using Single Pot Still distillation methods with a mashbill of 50% un-malted / 50% malted barley and triple distilled in copper pot stills. We age in the finest oak casks to mature every drop.  For more information on Talnua Distillery and the two August 2021 releases, please visit www.talnua.com, www.facebook.com/TalnuaDistillery, or www.instagram.com/talnuadistillery